Lisbon is Portugal’s capital and the hub of a multifaceted area that appeals to different tastes and senses. 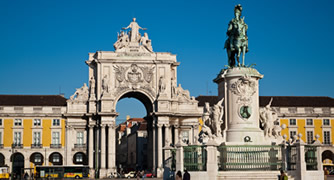 The Baixa is the heart of the city, one of the busiest areas, home of traditional shops and new designers and major brands known internationally. The geometry of the streets and the elegant sobriety of the façade contrasts with the old quarters. It is the result of the visionary spirit of the Marquis of Pombal, who undertook city reconstruction after the great earthquake of 1755. Start from Rossio and go down towards the sea along Rua Augusta to Praça do Comércio. For a superb view go up to the Arc de Triomphe or the Santa Justa Elevator. 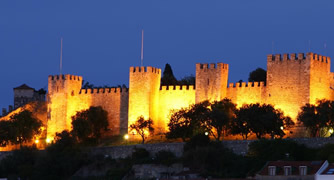 At the top of Lisbon, where we have the best view of the city, lies the Castle of St. Jorge. This is where it all began, the first king of Portugal conquered Lisbon in 1147. Around spreads Alfama and Mouraria, with their white houses and labyrinthine streets, courtyards and alleyways. It was in the middle of these seafaring neighborhood that Fado was born and, therefore, is certainly one of the best places where to listen to it. Going down the Castle slopes, take a moment of rest at the the Miradouro das Portas do Sol and enjoy the riverside view. 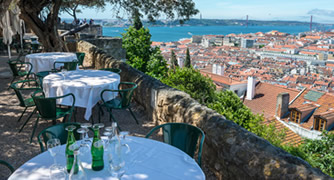 Lisbon is known as the "City of Seven Hills ", offering a huge variety of panoramic viewpoints over the Tejo river and urban landscape. Be it squares, alleyways or avenues, the sights of Lisbon are an essential part of the city's charm. Take the tram and explore the alleys of Graça, Penha de França , Senhora do Monte, Santa Catarina, Santa Lúcia , Santo Estêvão, São Pedro de Alcântara, São Jorge, parque Eduardo VII,Torel, Portas do Sol, Rocha Conde D´Óbidos, Moinhos de Santana and Montes Claros. 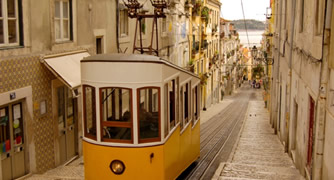 Chiado is one of the most enticing areas of the city, hub of cultural life, as shown by its theaters, cafes with literary tradition and old bookstores. Peaked in the XIX century and early XX as a meeting point for intellectuals and artists such as Fernando Pessoa and Almada Negreiros, although today still attracts artists and students of art and design. Also part of the convent of San Francisco, where the Faculty of Fine Arts Faculty operates, you can find the Chiado Museum, a landmark in the history of Portuguese contemporary art. 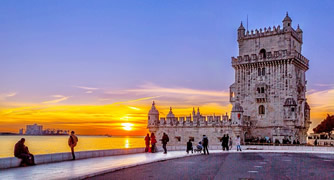 The harmony and delicate ornamentation of the Tower of Belém suggests a finely cut jewel to all laying eyes on her. However, its contemporaries took a rather different perspective: a formidable bastion defending the entrance to the Tagus and capable of combining firepower with the St Sebastian tower on the other bank of the river. Its construction was ordered by king Manuel I (1495-1521) and it was built by Francisco de Arruda between 1514 and 1521. You must also visit the magnificent Mosteiro dos Jerónimos, stroll up to the Docks, experience the Gardens and the tasty Pastel de Belém. 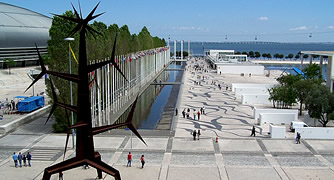 Imagine a site that offers some of the most daring examples of contemporary architecture, the Oceanário, one of the largest oceanaria in Europe, delightful thematic gardens, exhibition centres, shows and events. All located along a breathtaking 5 km stretch of the Tejo riverfront, with easy access and parking, and benefiting from a wide array of shops, restaurants and bars. Only five minutes from Lisbon International Airport, Parque das Nações builds on the heritage of EXPO'98 - the last world exposition of the twentieth century. An imagined city turned into reality.

Sintra, the Moon Hill, is a place full of magic and mystery, where Nature and Man have combined in such a perfect symbiosis that UNESCO has granted it Word Heritage Site status. 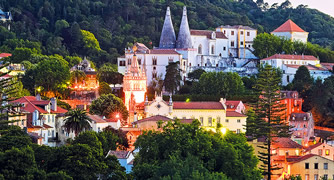 Just off the main square we see the Palace with its two singular conical chimneys, furthermore a compass to find the town center. Dating back tolate fourteenth century , it was summer resort of many kings throughout portuguese history. Each room is decorated in a unique fashion and has a story to tell, showing tiles from the XVI century. Be sure to eat a queijada and travesseiro while strolling through the village. Set off to discover every corner on foot or by horse-drawn carriage. Or, why not, both ways. 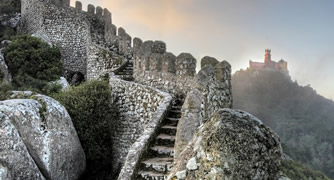 About 3.5 km from Sintra´s center, winding over two ridges of the Serra de Sintra, the Moorish Castle dates back to the early days of the Moorish occupation of the Peninsula - the 8th Century. After several attempts it was definitively taken by Dom Afonso Henriques in 1147, and there was built the first Christian Chapel of the borough. In the romantic period, about 1860, the walls were restored under the supervision of Dom Fernando II, who afforested the surrounding areas, and gave the old medieval ruins a new dignity. Noteworthy are the Moorish Cistern and Royal Tower. 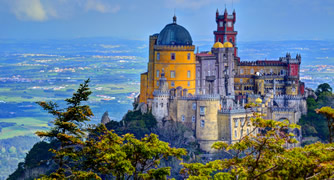 The palace was built on the site of an old monastery. It was fruit of the imagination of Dom Fernando of Saxe Coburg-Gotha, who married queen Dona Maria II in 1836. After falling in love with Sintra, he decided to buy the convent and the surrounding area to build a summer palace for the royal family. The king consort adopted Portuguese architectural and decorative forms for the palace, which he built according to the revivalist taste (neo-Gothic, neo-Manueline, neo-Islamic, neo-Renaissance) and decided to make a magnificent woodland park in the English style, with a wide variety of exotic tree species. 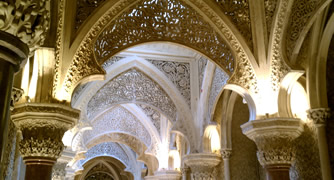 The park and palace of Monserrate, formerly a farm with fruit orchards and crop fields, were first imagined by Gerard DeVisme. He was followed by William Beckford, who also lived here, and Francis Cook. It was however Cook, first Vicount of Monserrate, who, together with the landscape painter William Stockdale, the botanist William Nevill and the master gardener James Burt, created the scenarios that are to be found in this romantic park, where narrow winding footpaths intertwine amongst ruins, nooks and crannies, waterfalls and lakes, in what, in only apparent disordered fashion. 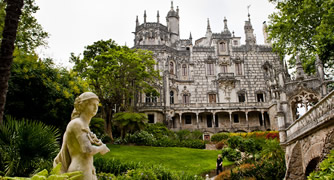 Close to the historic centre of Sintra is Quinta da Regaleira, one of the town’s most enigmatic places. The palace of Quinta da Regaleira was built in the early 20th century by the millionaire António Augusto Carvalho Monteiro (1848-1920), who managed to fulfil one of his dreams with the help of the scenographic architect Luigi Manini (1848-1936). Surrounded by lush green vegetation, the Palácio da Regaleira is a fascinating discovery. It was built in a Romantic revivalist style, in an imitation of Gothic, Manueline and Renaissance architectural and decorative forms, mixed with a mythical and esoteric symbolism. 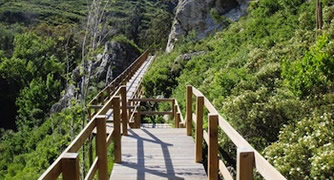 If you're interested in geology, make sure to visit notable formations such as the fossil dunes in Magoito and Oitavos, the fields of calcareous stone eroded by the seawater next to Cabo Raso and the “living” cliff in Azenhas do Mar. The dinosaurs also left their markings, in the almost vertical chalk layer of the South Cliff of Praia Grande where a collection of 11 trails and footprints can be seen. Go visit Convent of the Capuchos, a modest 16th century convent, or the Hermitage of Peninha, erected on a high point near the coast, offering a spectacular panorama.

The golden sandy beaches of the Sintra coast, close to Lisbon, are very popular and offer excellent restaurants to relish a fish meal and a good, refreshing white wine, like Colares, for example. 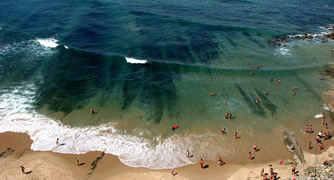 Praia Grande is one of the many beaches found on the coastal rim of the Park, that also includes Adraga, Praia das Maçãs or Guincho, integrated within a highly characteristic system of sand dunes. Visitors will find excellent conditions for practising windsurf, surf and bodyboard or simply relaxing by the sea. 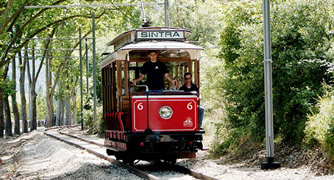 It was March 30th, 1904, more than 110 years of the inauguration of the Sintra electric line. Today you can still quietly enjoy the lush green of the Sintra hills, passing through the villages on the road between the village and Praia das Maçãs, such as Colares, a wine producing area, landmark between the Serra de Sintra and the beaches. 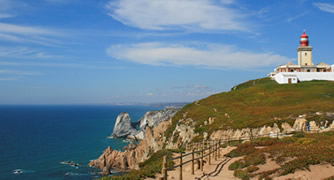 The westernmost tip of the European continent, was considered in ancient times, the place where "the land ends and the sea begins" - the Cabo da Roca is one of the most spectacular locations in the park. Its vertical cliffs rise 100 m above sea level, offering spectacular landscapes.

By continuing to use the site, you agree to the use of cookies. more information